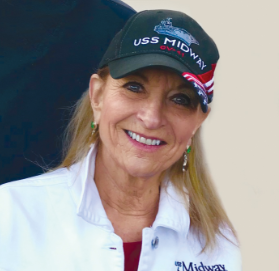 I am a big believer in being positive, looking at the glass as half full. I absolutely believe that being positive can be beneficial to your health, your relationships and even your career. I am a cheerleader by nature, an eternal optimist by choice, which is not always easy, especially in today’s increasingly angry world.

Amongst all the negative chatter we hear almost every day, I took solace in this old, but wonderful story:

While roaming the hot desert, a young man came across a spring of delicious water. The water was so sweet he filled his leather canteen so he could bring some back to an elder who had been his Teacher.

After a very long, 4-day journey he presented the water to the old man who took a deep drink, smiled warmly and thanked his student for the delicious water. The young man returned to his village with a very happy heart.

Later that day, the Teacher let another student taste the water. He spat it out, saying it was just awful! It apparently had become quite stale during the 4-day journey in the old leather container. The student challenged his teacher: “Master, the water was foul! Why did you pretend to like it?”

The Teacher replied, “Son, you only tasted the water. I tasted the gift. The water was simply the container for an act of loving-kindness and nothing could be sweeter.”

I feel our energy can be depleted when we’re only focused on what’s wrong instead of what is right with our lives. One of our greatest challenges is to live and love in spite of fear, sadness, and despair. It is all about CHOICES.

Working at the USS Midway Museum has shown me that for generations, millions of young men and women have chosen to fight for our freedoms, have chosen to defend our liberties, and chosen to do what is right by sacrificing for our country.

I am lost for words when I meet former POWs, the humble men who are our forever heroes. I am continually stopped in my tracks when I see the young midshipmen or the huge marching brigade of chief petty officers when I realize their career choices are for YOU and for ME. Their decision to join the military is for the betterment of OUR future, to advance freedom, to protect our lives, and to make sure we never forget that the horrors of war are­­—horrible.

Even when faced with the global pandemic over the last year and a half, our nation’s finest have chosen to continue putting themselves in harm’s way all around the world. They choose to oppose oppression, terror, lawlessness and brutality in the hope of ultimately fostering, peace, kindness, order and humaneness.

These servicemembers who have chosen this sacred path are, in my book, heroes and champions of all that is good and right. I’m thankful every day for the men and women who wear the uniform of our country. I am so very proud, and slightly verklempt, to be associated with such an outstanding, awe-inspiring group of people.

To all of you who have served in any way, you have my deepest respect and love. Thank you, sincerely, thank you!

Over the past few months, Midway has hosted a number of high-profile television programs. Leading up to the PGA’s U.S. Open golf tournament at San Diego’s own Torrey Pines Golf Course in June, ESPN filmed a segment of its “America’s Caddie” show with host Michael Collins reporting from Midway’s flight deck. The Discovery Channel’s spent time with Karl Zingheim, Midway’s historian, discussing the museum’s TBF Avenger World War II torpedo bomber for an upcoming “Expedition Unknown” episode. Our friends from the Science Channel stopped by to take a closer look at Midway’s historic H-5 Dragonfly helicopter for its “Impossible Engineering” program. Great national and international exposure for Midway.

More than 100 years ago, the Girl Scouts started selling cookies as a way to help cover the costs of troop activities. In 2002, a local Girls Scout service project in San Diego centered around cookies was launched as a way of thanking the military for their service and sacrifice. Operation Thin Mint was born.

“I’m so proud of the Girls Scouts and the San Diego community for genuinely embracing Operation Thin Mint for 20 years now,” said retired U.S Navy Capt. Jo Dee Jacob, who launched the program as CEO of Girl Scouts San Diego. “We will always have forces deployed and serving overseas. They will always appreciate a taste of home and a note to show that we care.”

Midway has partnered with Girl Scouts San Diego for more than 15 years and was thrilled to help them commemorate the 20th anniversary of Operation Thin Mint.

“We love our longtime partnership with the USS Midway Museum,” said May Doyle, director of communications for Girl Scouts San Diego. “The Operation Thin Mint sendoff on the Midway is a highlight of the Girl Scout year.”

“It’s great continuing our support for the Girl Scouts and their amazing program that gives back to our servicemembers,” said Paulette Mello, Midway’s community outreach coordinator. “We’re excited to hold more Operation Thin Mint events on the ship in the future.”

Throughout the month of April, Midway hosted an Operation Thin Mint booth and exhibit on the ship’s hangar deck. Museum visitors were excited to see the Girl Scouts on the ship.

“The museum was the perfect setting to share the story of Operation Thin Mint, said Mary. “While most San Diegans are familiar with Operation Thin Mint, it was a new concept to Midway’s out-of-town visitors, and they were awed by its scope and impact. The girls who hosted the cookie booth enjoyed chatting with visitors about Operation Thin Mint and our connection with Midway.”

“Visitors thanked my three daughters for participating in Operation Thin Mint,” said Girl Scout troop leader Elisa Hillard. “Many of the Midway’s guests also shared stories with us of their relatives who had received cookies and notes while deployed.”

“Midway has welcomed Girl Scouts with open arms,” said Mary. “We look forward to collaborating for many more years.”

Celebrating their 50th anniversary this summer, Southwest Airlines has always had heart and a commitment to community. It demonstrated that commitment and heart again this past June by renewing support for Midway, despite the difficulty endured by the airline industry in 2020.

As official airline of the USS Midway Museum, Southwest Airlines supports Midway’s Flight Academy and is naming sponsor of the Southwest Airlines Flight Academy Lab where students learn the principles of flight during youth education and overnight programs including Operation Wing Scout patterned after the original 1940s Girl Scout program. Additionally, Southwest Airlines partnership supports Midway’s commitment to deliver meaningful, memorable experiences and mission of inspiring, educating, and entertaining almost a million and a half visitors every year.

“Southwest is honored to partner with the USS Midway Museum to preserve a legacy of service for current and future generations,” said Kelly Knox, Southwest Airlines community outreach for California. “Our Southwest Hearts beat for the red, white, and blue, with nearly 13 percent of our workforce bringing a military background to the airline.”

“Midway and Southwest Airlines are completely aligned in our objectives for guest experience and our commitment to service and the San Diego community,” said Craig Fisher, Midway’s director of partnership marketing. “And, Southwest Airlines leads by example when it comes to civility, corporate kindness, and caring.’”

Examples of Southwest Airlines’ commitment to caring and kindness during its 50 years include transporting orphaned and abandoned pets to the Helen Woodward Animal Center during Hurricane Harvey; ongoing support for the Honor Flight Program that transports U.S. veterans, free of charge, to Washington, D.C., to visit the nation’s war memorials; repurposing leather from airline seats to make closed-toe shoes, sandals, and soccer balls for kids in Kenya; and Southwest Airlines’ one million

Southwest Airlines’ caring and kindness has resulted in more than 1.5 million hours of volunteer work by employees, $222 million donated to local communities and 475,000 flights donated for those in need since 2008.